Have you ever considered making money from video games?  The video games market is huge and growing at an exponential rate and there are several ways you could profit from it.

If you were to learn coding you could have a very lucrative career as a games programmer.  Alternatively, you could become a games tester or if you’re really good, become a professional gamer and compete in tournaments around the world, for big money.  You could set up your own stream to showcase your gaming talents, funded by subscribers and sponsors.  There are so many potential ways to make money from gaming.

If that all sounds like too much hard work and you’re of a certain age, perhaps you have some retro computers and video games, collecting dust at home.  These are becoming very popular with collectors.  You just have to check the likes of Ebay, to get an idea of what your items may be worth. 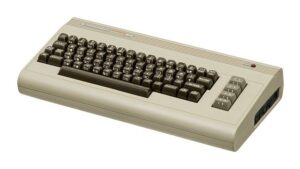 I recently sold one of my Commodore 64 computers and a few games, for much more than I was expecting.  Connecting it all together and testing it beforehand, made me feel very nostalgic for the retro era I grew up in.

If you want more convincing on how popular retro games have become and the potential for making money from any you may own, then read on…

To get a feel for their increasing popularity, you need only look online and see the many games that are available to play on various platforms.  They don’t only appeal to the generation that grew up with them but also a much younger audience.  The massive success of Minecraft, with its blocky graphics, has helped to bridge the generation gap and made retro cool with the kids!

I grew up playing pong, space invaders, pac-man, jet set willy etc.  I still love the simplicity and cuteness of them.  It’s all about the gameplay rather than relying on cutting edge graphics and cinema quality sound.  Only the best games stand the test of time.

During a recent search I came across some great retro games, such as one for mini golf.  I’ve always loved mini and crazy golf.  I enjoy playing it in the real world and I enjoy playing video game versions too.  Few games bring out such diverse emotions.  It’s either insane frustration or immense smug satisfaction and I just love the wacky nature of it all.  This particular game was Nick Ultimate Mini Golf Universe and I was soon hooked.  Five courses of insane madness.  Ever considered playing golf with a hamburger or a chicken, instead of a ball?  Me neither, but I did say it was wacky!

From something insane to something a lot more practical… can you touch type?  If you can to a reasonable standard this can open up many job opportunities.  Everybody uses a keyboard to some capacity, nowadays.  I learned to type during my college days and it’s undoubtedly the most useful skill I practice regularly.  Without having this ability, I wouldn’t be able to blog.

Whether you’re a novice or just want to increase your typing speed in a fun way, I have a game for you.  In Zombie Typing a series of zombies stagger across the screen, each one accompanied by a word.  Your task is to type the words as fast as possible.  As you do, the boys shoots the zombies, one by one and you score points each time.  If you’re too slow the zombies will reach the boy.  The game ends if the zombies reach the boy four times. 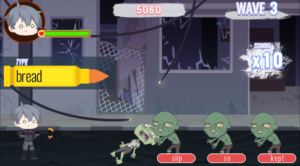 I found it quite easy to begin with, but the zombies get quicker and the words longer, as you progress.  Eventually, the envitable happens and it’s ‘game over’ .  Clearly the faster your typing speed is, the less challenging this will be for you.  If you don’t touch type, I can imagine it may be quite difficult from the start, until you’ve practiced a bit.

Whatever your current ability, you’re sure to improve over time.  I love fun games that have a practical element built in to them.  It gives me a good excuse to play them longer!

I hope this has got you thinking about possible ways you could make money from gaming and related skills.

Whether you have existing skills or would like to learn new ones, there are a range of opportunities to explore.

Do you have any retro computers and games, you’d forgotten about?  You could cash in now or keep them as a long term investment.  Whatever you do, don’t let them go on the cheap!

I’m hanging on to the rest of my retro computers and games, for now.  Interest and demand is sure to increase and prices will doubtless follow.

Scroll Up
We use cookies on our website to give you the most relevant experience by remembering your preferences and repeat visits. By clicking “Accept All”, you consent to the use of ALL the cookies. However, you may visit "Cookie Settings" to provide a controlled consent.
Cookie SettingsAccept All
Manage consent

This website uses cookies to improve your experience while you navigate through the website. Out of these, the cookies that are categorized as necessary are stored on your browser as they are essential for the working of basic functionalities of the website. We also use third-party cookies that help us analyze and understand how you use this website. These cookies will be stored in your browser only with your consent. You also have the option to opt-out of these cookies. But opting out of some of these cookies may affect your browsing experience.
Necessary Always Enabled
Necessary cookies are absolutely essential for the website to function properly. These cookies ensure basic functionalities and security features of the website, anonymously.
Functional
Functional cookies help to perform certain functionalities like sharing the content of the website on social media platforms, collect feedbacks, and other third-party features.
Performance
Performance cookies are used to understand and analyze the key performance indexes of the website which helps in delivering a better user experience for the visitors.
Analytics
Analytical cookies are used to understand how visitors interact with the website. These cookies help provide information on metrics the number of visitors, bounce rate, traffic source, etc.
Advertisement
Advertisement cookies are used to provide visitors with relevant ads and marketing campaigns. These cookies track visitors across websites and collect information to provide customized ads.
Others
Other uncategorized cookies are those that are being analyzed and have not been classified into a category as yet.
SAVE & ACCEPT